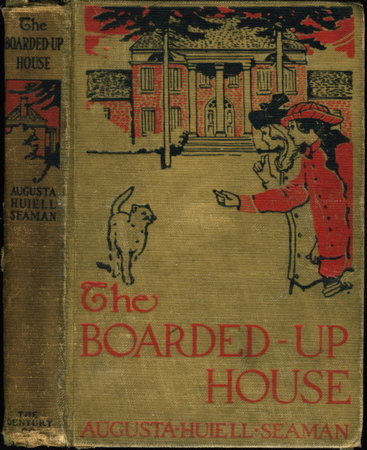 New York: The Century Co., 1919 (c. 1915). Hardcover - The first of Seaman's mysteries for girls and still one of her most popular and sought-after books. As most of her best books do, this involves solving a mystery buried in the past - in this case, during the Civil War - to solve a current mystery - what is the story behind this mysterious old house? In a nod to enduring popular culture, the two friends are reading the Sherlock Holmes book "Sign of the Four" and wish they had his mystery solving abilities. Although at least 14 printings are known withThe Century Company imprint, and it was kept in print after Century merged with D. Appleton in 1933,this title remains rather hard. Illustrated with a frontispiece and 7 inserted glossy plates by C. Clyde Squires. 217 pp.

Condition: Fair condition only in the tan covers with a black and red illustration on the front cover. Some soiling to the covers and toning to the spine, front hinge cracked, previous owner's name. Missing the frontispiece and two of the plates (5 plates are still present.) Still a bit better than just a good reading copy of a rather hard to find book.