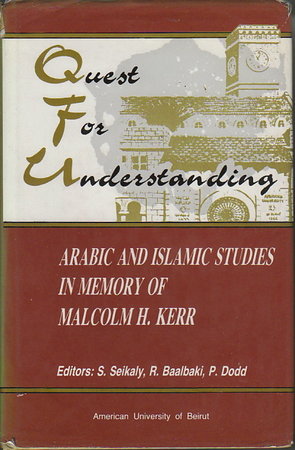 QUEST FOR UNDERSTANDING: Arabic and Islamic Studies in Memory of Malcolm H. Kerr.

Beirut, Lebanon: American University of Beirut, (1991.) dj. SIGNED hardcover first edition - Includes "a rich collection of Arabic and Islamic studies contributed by an international body of scholars. In memory of the late Malcolm H. Kerr [who was President of the American University at the time of his death] The essays reflect his abiding interests and contain studies of contemporary Middle Eastern politics, the history of Lebanon, and the Muslim legacy in art, philosophy, and science." Perhaps even more timely now than was it was first published. Includes a foreword by Peter Dodd, an essay on Kerr by Samir M. Seikaly and a Malcolm Kerr bibliography. Among the contributors and topics are Kamil Salibi on Mount Lebanon under the Malmuks, Rashid Khalidi on External Intervention in Lebanon, William B. Quandt on the Camp David negotiations, Lawrence I. Conrad on the archeology of early Islam, Henry J. MacAdam on 19th century Orientalist and diplomat William Henry Waddington and much more. This copy is an interesting association copy SIGNED with the words "towards understanding Moslem' by author S. A. Maududi (who has written several books on the Holy Qur'an and on Islam) and also SIGNED in purple ink by Gary Zukav under the words "Dancing Wooly Masters" and above "glorious Quran" (Zukav is the author of 'The Dancing Wu Li Masters' among other books). Presumably Zukav's personal copy with some underlining and marginal notations in several essays in the same purple ink (also in green and blue ink). Photographs, notes, index. xli, 326 pp

Condition: Very good in a good dustjacket (marginal notations and underlining, edgewear to the dj, sunning to the spine.)