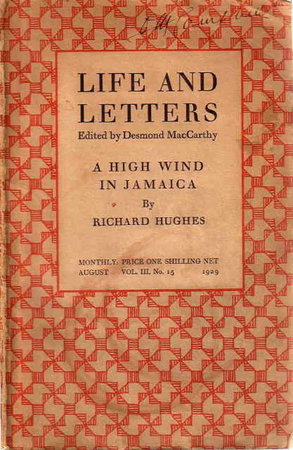 Edition: First appearance in print of this work.

London: Life and Letters, 1929. First edition - The first publication of this classic novel, considered one of the best novels ever written about childhood and possibly an influence on such later novels as Golding's Lord of the Flies. Set in the late 19th century, this is both a poetic and an ironic account of seven young children, on their way to school in England after a hurricane destroyed their home in Jamaica, who wind up on a pirate ship. As explained in the editorial by MacCarthy, it had been the intent of this literary journal to devote an entire issue to one controversy or one work - but the editors wanted to be sure that such a work would be one of 'unusual merit and originality.' and they felt this novel by Hughes met their requirements. Rather than serializing the novel, they increased the length of the periodical and shortened the novel somewhat so the entire story could be presented in one issue - preceding the publication in book format by Chatto and Windus, but as MacCarthy stated 'no one who reads this abbreviated version can fail to want to possess the book.' pp 82-242. Advertisements.

Condition: Fair condition only in red and tan wrappers (spine slant, some soiling to the covers and edges of textblock, previous owner's name on front cover.) Nevertheless, quite uncommon and interesting,