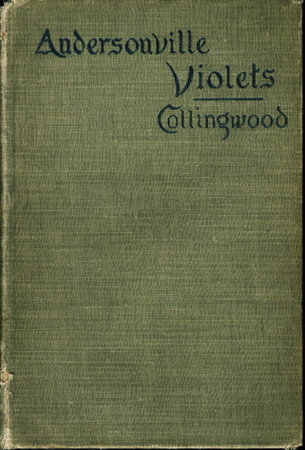 ANDERSONVILLE VIOLETS: A Story of Northern and Southern Life.

Boston: Lee and Shepard Publishers (New York: Chas T. Dillingham), 1889. Hardcover first edition - Classic Civil War novel about an Andersonville prisoner-of-war John Rockwell, who reaches across the "deadline" to pluck a bunch of violets, and about the Southern soldier and prison guard, Jack Foster, who ignores regulations and does not shoot him. When this was first published, almost twenty-five years had passed since the Civil War, but sectarian feelings still ran high on the subject of how prisoners-of-war were treated, and Andersonville, especially, was an example to the North of inhumane treatment. Although there was beginning to be some recognition that neither the North nor the South were blameless, and that it was the nature of the war itself that led to so much suffering, Collingwood's novel was an important "popular" attempt to heal this divide by portraying the soldiers of both sides as men first, who were able to respect the soldiers on the other side, and even sometimes to reach across to each other. Collingwood went on to become the well-known and highly respected editor of "The Rural New Yorker, The Business Farmer's Paper" and a crusader for honesty in advertising, among other things. At one point, he was an outspoken opponent of the promotion of a hybrid developed by Luther Burbank, which was renamed the "wonderberry." 270 pp. plus 10 pp of publisher's advertisements.

Condition: Good only (some overall wear to the covers, fraying to the sides of the spine, missing rear endpaper, but still sturdy condition.) Very uncommon in the first edition with no copies currently available for sale.