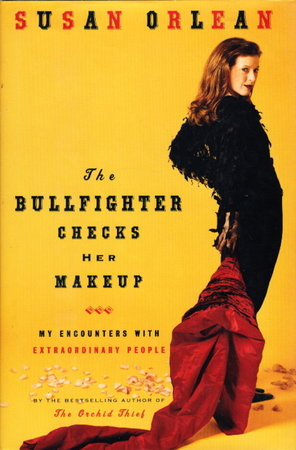 THE BULLFIGHTER CHECKS HER MAKEUP: My Encounters with Extraordinary People.

New York: Random House, (2001.) dj. SIGNED hardcover first edition - The third book - a collection of 35 essays by this New Yorker writer and the author of "The Orchid Thief" (which was the basis of the film, "Adaptation" featuring Meryl Streep.) The subjects include people, famous, infamous, and obscure and even a dog with a resemblence to Bill Clinton. Among those profiled are the eponymous Cristina Sanchez, the first woman to become a matador in Spain; Bill Blass and Tonya Harding, a traveling gospel group, the Southernaires, and an African king who is a New York city taxi-driver. SIGNED on the title page. 294 pp. ISBN: 0-679462988.