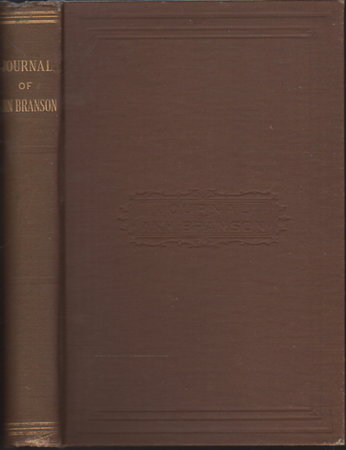 JOURNAL OF ANN BRANSON: A Minister of the Gospel in the Society of Friends.

Philadelphia: Wm. H. Pile's Sons, Printers, 1892. Hardcover first edition - Posthumous publication of this journal which covers the period from 1833 to just 5 days before her death in 1891. Preface by her cousin Asa Branson. The first chapter gives a brief history of early years (she was born in Ohio in 1808). While most of it deals with both the spiritual beliefs of the Quakers, her own spiritual temptations, progress and concerns and her extensive travels - to New England, Pennsylvania, etc, and meetings with others as a minister, there is also some commentary on other matters - in 1845 she commented on the prevalence of "black tongue" or Erysipelas fever and the reports of starvation in Ireland. In 1848, she discussed her labors and concern relative to California gold-hunting, and during the Civil War she recounted her unsuccessful attempt to keep a young man from going to the army and the notice of his death soon after. Index. 408 pp. Uncommon.

Condition: Near fine in embossed brown cloth, with gilt lettering on the spine.