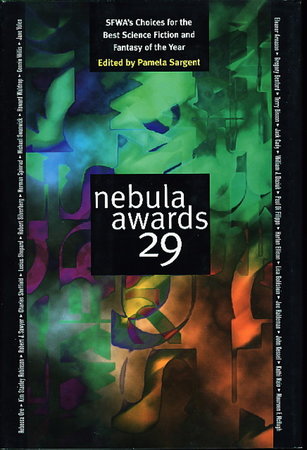 NEBULA AWARDS 29: SFWA's Choices for the Best Science Fiction and Fantasy of the Year.

New York: Harcourt Brace & Company, (1995.) dj. SIGNED hardcover first edition - The twenty-ninth volume in this series of anthologies honoring the winners as well as some of the other nominees for the Nebula Awards. SIGNED by SEVEN of the authors at their contributions: by Kim Stanley Robinson at an excerpt from his award winning novel "Red Mars"; by Connie Willis at her novella "Death on the Nile"; by Lisa Goldstein at her short story "Alfred"; by Terry Bisson at "England Underway"; by John Kessel at "The Franchise" and by Gregory Benford at his essay "Conversations and Constraints" and Michael Swanwick at his essay "The Rise of Ambition, the Fall of the Future." Also included are Jack Cady's "The Night We Buried Road Dog" ; stories by Harlan Ellison, Joe Haldeman, Charles Sheffield,William J. Daciuk and Jane Yolen, contributions to a symposium on the year's science fiction by Robert Sawyer, Rebecca Ore, Paul di Fillipo, Norman Spinrad, etc. and more. Appendix with the preliminary ballot for the 1993 Nebula and also past Nebula Award winners. 307 pp. Dust jacket art by Steven Cooley. ISBN: 0-15-1001073.