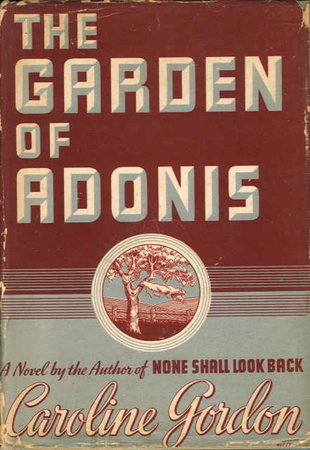 THE GARDEN OF ADONIS.

New York: Scribner's, 1937. dj. SIGNED hardcover first edition - Her fourth novel, a story of the modern agrarian South, by an author who was, with her husband Allen Tate, at the center of the influential Agrarian and Fugitive movements. INSCRIBED on the front endpaper, 'For James Wade, Cordially'. Scarce thus.

Condition: Very good- in a good only dust jacket (a good tight and straight copy with some toning to the pages, considerable offsetting on the endpapers, in a dustjacket with about a half inch chip at top of spine, extending onto back cover, other edgewear, rubbing and chipping. Bookplate mostly hidden by front flap. Price of 2.75 on front flap, rear cover has a photograph of Gordon and reviews of her previous three novels.)