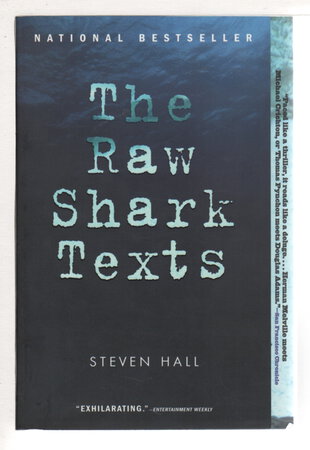 New York / Edinburgh / Melbourne: Cannongate, (2008). The author's very highly praised first novel, the story of Eric Sanderson who has lost his memory, his girl, and his life as he once knew it. From the review by Audrey Niffenegger "I was drawn to his book because of the typography: The Raw Shark Texts is riddled with typographic games, codes, a flip book, and a boatload of very elegant plot devices that hinge on collisions between the Information Age and the imagination. At one point Eric and Scout, his guide/love interest, are speeding away from the conceptual shark on a motorbike. Scout eludes the shark by exploding a letter bomb, a bomb made out of old metal type; the type diverts the shark into a stream of random letterforms. . . . There's echoes of Cyberpunk, Borges, Auster; there is adventure on the high seas, lost love, an exploration of what it means to be human in the age of intelligent machines." 428 pp. ISBN: 978-1847671745.