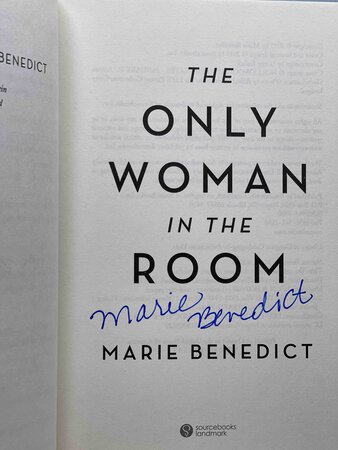 THE ONLY WOMAN IN THE ROOM.

Naperville: Sourcebooks Landmark, (2019) dj. SIGNED hardcover - Historical novel based on the life of Hedy Lamarr. "Her beauty led to marriage with an Austrian arms dealer. Underestimated in everything else, she overheard the Third Reich's plans while at her husband's side, understanding more than anyone would guess. She devised a plan to flee in disguise from their castle, and the whirlwind escape landed her in Hollywood. She became Hedy Lamarr, screen star." Less well-known about Lamarr is that she and composer George Antheil developed and patented a frequency hopping system, intended to be used for guiding topedoes during World War II. While the Navy rejected this system at the time (because Lamarr was a woman?) this idea is the basis for spread spectrum technology used in our wifi and cellphones every day. Since the patent had expired, it was only in 1997 that Lamarr received any recognition for this work with the American Electronic Frontier Foundation's Pioneer Award. SIGNED on the title page. 243 pp plus an author's note, reading group guide. ISBN: 978-1492666868.

Condition: Near fine in a fine dust jacket. (bookplate)