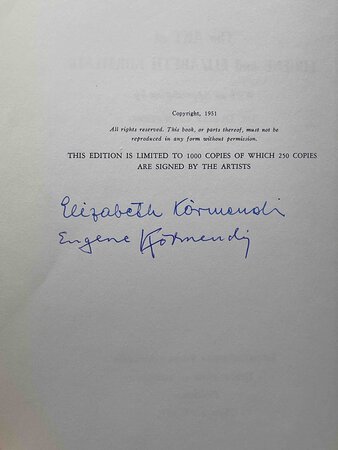 THE ART OF EUGENE AND ELIZABETH KORMENDI.

New York: International Press Associates Psychological Library, 1951. SIGNED hardcover first edition - An introduction to the works of this Hungarian husband and wife team of artists known for their sculpture and ceramic works; the emphasis is on works of a religious nature. The Kormendis were visiting the United States for the World's Fair in 1939 when war broke out and they were unable to return to Hungary. Includes an appreciation - 'Memories of the Danube' - by Dudley C. Watson and 47 black and white plates. One of 250 copies (of a total edition of 1000) SIGNED by both artists. A slim volume, unpaginated.