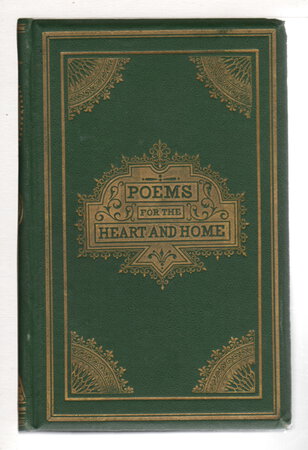 THE POET'S SONG: for the Heart and Home.

New York & Boston: Sheldon & Company / Gould & Lincoln. 1967. SIGNED hardcover first edition - A collection of poems by this writer who was a Baptist minister in Connecticut and Rhode Island, and later the editor of The Christian Secretary as well as the author of several books of poetry and travel, and the lyrics for many hymns. Many of the poems in this collection reflect his New England heritage, others have religious themes - and some deal with current events, including the death of Lincoln -and "An Outrage in the US Senate" referring to the beating of Sumner. The long title poem dates from 1863, in the midst of the Civil War. INSCRIBED on the first blank page "Dryden W. Phelps, with his father's love" and dated New Year's 1867. Frontispiece with tissue guard. Notes. 416 pp plus a 2 pp advertisement for his book on the Holy Land.

Condition: Near fine condition in dark green cloth, elaborately decorated with gilt on both covers and the spine, all edges gilt. A bit of fraying at the top of the spine, and some rubbing to the brown endpapers, but a lovely small volume.