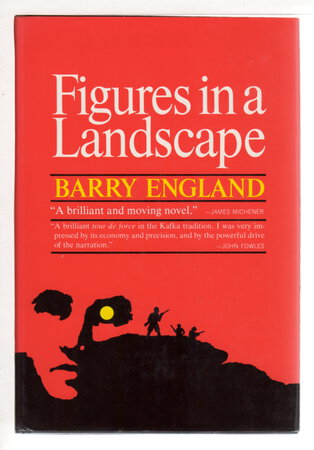 FIGURES IN A LANDSCAPE.

New York: Random House, (1968) dj. Hardcover first edition - The author's first novel, a story of two professional soldiers, Ansell and MacConnachie, who have escaped from a column of POWs in an unnamed country in the tropics. They must make their way through 400 miles of alien territory, battling the climate and the terrain as well as the enemy's soldiers and helicopters. The Times review noted "The speed of the narrative is impeccably controlled - long slogs over country, moments of blind panic, passages of demoralizing inactivity, hair-raising evasions, all building up to a central set-piece in a burning field.. . a brilliant achievement." Nominated for the first Booker Prize and winner of the Author's Club First Novel Award. Basis for the 1970 film directed Joseph Losey in 1970, and featured Robert Shaw and Malcolm McDowell. 215 pp.

Condition: Ex-library with relatively few markings, and overall tight and clean in a very near fine unmarked dust jacket.