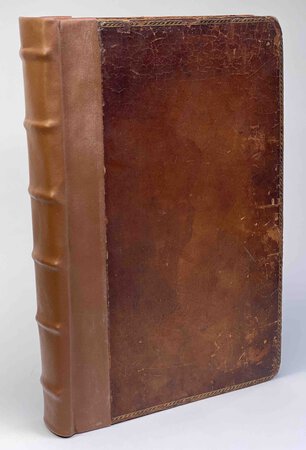 AESOP'S FABLES WITH HIS LIFE: in English, French and Latin. Newly translated. Illustrated with one hundred and twelve SCULPTURES. To this edition are likewise added, thirty one new figures representing his life by Francis Barlow.

London: Printed by R. Newcomb, for Francis Barlow, and are to be sold by the Booksellers of London and Westminster, 1703. Hardcover - A re-issue of the second edition of Aesop's Fables illustrated by Francis Barlow, which was published in 1687. Most copies of the 1666 first edition were destroyed in the Fire of London, but the plates were preserved. The second edition added 31 new plates (32 including the frontispiece) for the translation of Planudes's Life of Aesop, and new English verse summaries of the Fables by Mrs. Aphra Behn, one of the first English women to earn her living by writing. After three versions of the Life of Aesop - in English, French, and Latin - are the 110 fables themselves: each has a French prose version with Le Sens Moral; the half-page illustration including the English verse version; and the Latin prose version with its moral. Although Barlow was a prolific book illustrator and print-maker, the Fables are the work for which he is best known. Hodnett commented that "His birds and animals, no less than his human beings, are the believable, reacting embodiments of those vain, gullible, shrewd, and predatory creatures that the legendary Aesop made immortal...[His] originality as an interpretive illustrator grows out of something more than his superb draughtsmanship. The constant emotional involvement of his characters, human and dumb creatures, in the scenes they act out so vigorously, invests his illustrations with dramatic excitement." There seem to be many variations in this printing - among significant variations, this copy does not include the engraved dedication page; the infamous plate 17 has been removed, and the frontispiece to the life is inserted before the French version. Each section is paginated separately, the English and French translations of the life are 40 pp (with the full page plates inserted in the French version), the Latin is 19 pp and the fables are 221 pp followed by a 2 pp table. Folio (305 mm).

Condition: An attractive copy in the original publisher's brown leather boards, with the spine professionally replaced in goatskin with six-hubs. The new marbled endpapers reproduce the original papers (laid in). The text block is overall in good condition, although there is some foxing, especially on the verso of the leaves with full page illustrations, as well as some offsetting from the engravings.