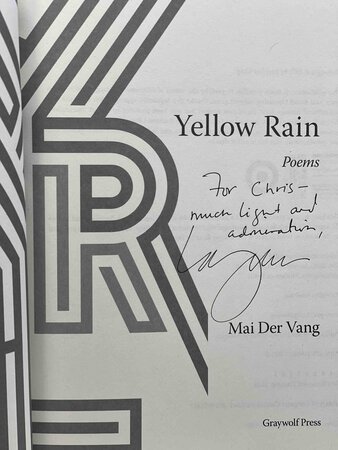 Minneapolis: Graywolf Press, (2021). SIGNED first edition - The second book by this award winning poet of Hmong ancestry - a combination of "documentary, poetry, and collage, [which] reopens a wrongdoing that deserves a new reckoning. As the United States abandoned them at the end of its war in Vietnam, many Hmong refugees recounted stories of a mysterious substance that fell from planes during their escape from Laos starting in the mid-1970s. This substance, known as yellow rain, caused severe illnesses and thousands of deaths. These reports prompted an investigation into allegations that a chemical biological weapon had been used against the Hmong in breach of international treaties [but] the truth of what happened to the Hmong, to those who experienced and suffered yellow rain, has been ignored and discredited." Finalist for the Pulitzer Award and winner of the Lenore Marshall Poetry Prize. INSCRIBED on the title page. Square format. 205 pp. ISBN: 978-1644450659.