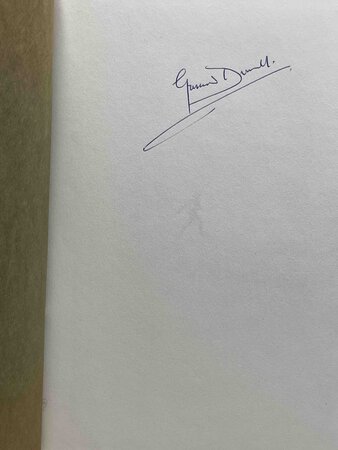 FAUNA AND FAMILY: An Account of the Durrell Family of Corfu.

New York: Simon & Schuster, (1979) dj. SIGNED hardcover first edition - A warm and funny memoir by this distinguished naturalist and founder of the Jersey Wildlife Preservation Trust - he "writes about his adventures with friends (human and animal), his family (including his brother novelist Lawrence Durrell), and a whole army of welcome and unwelcome visitors to the enchanted island of Corfu, on which the Durrell family lived in the halcyon days before the Second World War." SIGNED by Durrell on a blank preliminary page and uncommon thus. Originally published in the UK under the title 'Garden of the Gods.' 219 pp. Wraparound dust jacket art by Mark Hess. ISBN: 0-671247298.