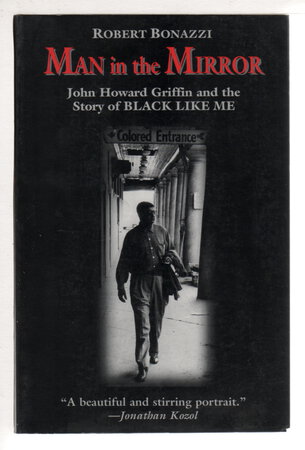 MAN IN THE MIRROR: John Howard Griffin and the Story of Black Like Me.

Maryknoll, NY: Orbis Books, (1997). SIGNED - A book which describes the events that shaped Griffin's character as a crusader against racism. Born in Dallas in 1920, he spent 6 years in France, first at school and after the Nazi occupation, working with the Resistance to help save Jews. A stint in the air force took him the Solomon Islands, where a bombardment blinded him for ten years. Back home, he converted to Catholicism, wrote a bestselling novel, and then in 1959, he came up with the idea of darkening his skin and touring the Deep South disguised as a black man for a magazine series that became "Black Like Me,"" published in 1961 to wide acclaim - and still a valuable book. INSCRIBED by the author Robert Bonazzi, on the title page. Photographs, notes, xiv, 208 pp. ISBN: 1-570751188.