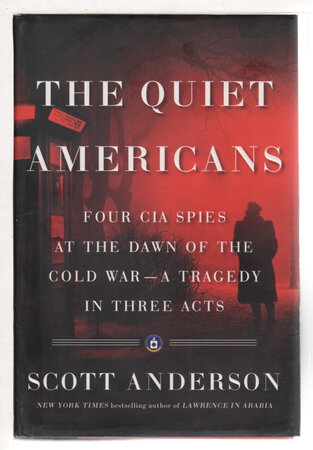 THE QUIET AMERICANS: FOUR CIA SPIES AT THE DAWN OF THE COLD WAR: A Tragedy in Three Acts.

New York: Doubleday, (2020) dj. Hardcover first edition - At the end of World War II, the Soviet Union was executing a plan to foment revolution around the world. "The American government's strategy in response relied on the secret efforts of a newly-formed CIA. [This] chronicles the exploits of four spies - Michael Burke, a charming former football star fallen on hard times, Frank Wisner, the scion of a wealthy Southern family, Peter Sichel, a sophisticated German Jew who escaped the Nazis, and Edward Lansdale, a brilliant ad executive. The four ran covert operations across the globe, trying to outwit the ruthless KGB in Berlin, parachuting commandos into Eastern Europe, plotting coups, and directing wars against Communist insurgents in Asia. But time and again their efforts went awry, thwarted by . . the decision to abandon American ideals. By the mid-1950s, the Soviet Union had a stranglehold on Eastern Europe, the U.S. had begun its disastrous intervention in Vietnam, and America. . was overthrowing democratically-elected governments and earning the hatred of much of the world. All of this culminated in an act of betrayal and cowardice that would lock the Cold War into place for decades to come." Photographs, notes, bibliography, index. x, 562 pp. ISBN: 978-0385540452.