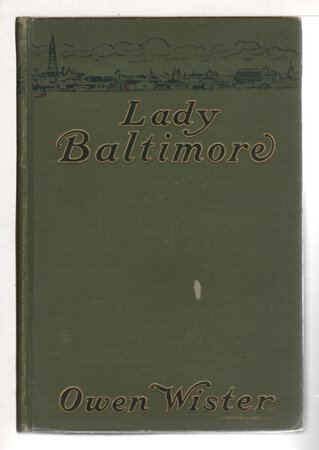 New York: Macmillan, 1906. Hardcover first edition - On one level, this can be read as an amusing novel about the attempts of New York society girl, Hortense Rieppe, to make sure that an impoverished Southern gentleman, John Mayrant, who had become enamored of her, follows through with their engagement and marriage (Lady Baltimore is the name of a wedding cake). Set in Charleston, South Carolina. at the end of the nineteenth century when the 'New Rich' of Newport were considered examples of vulgarity and philistinism by traditional Southerners. Underneath that story, though, is the casual and deeply racist assumption that of course Black Americans will never achieve equality with whites - and there is the implicit argument that the country would have been better off if the South had prevailed in the Civil War. Although Wister was born in Philadelphia, his sympathies were clearly with the "natural aristocrats" of the South, as exemplified in his most famous novel, 'The Virginian.' Illustrated with a frontispiece and 12 internal plates by Vernon Howe Bailey and Lester Ralph. 406 pp. plus 2 pp publisher's ads.

Condition: Very good in publisher's original green cloth with the front cover and spine stamped in gilt and dark green (front hinge slightly cracked, some wear to the covers).