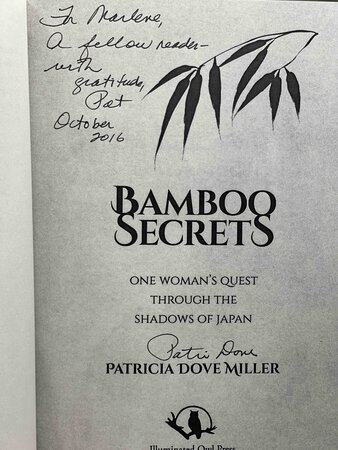 BAMBOO SECRETS: One Woman's Quest through the Shadows of Japan.

Nevada City, California: Illuminated Owl Press, (2016). SIGNED first edition - A memoir which "weaves together four strands: a mature woman in search of herself, a marriage in trouble, the dark side of Japan, and the beauty of Japanese art and culture. While living in Japan in 1993, Patricia Dove Miller's dream of a year of exploration is shattered when her husband is detained on drug charges. She struggles with a sense of betrayal upon learning her husband's secrets and yet she stands by him, in the face of the terrifying uncertainties now confronting them. To save herself, she seeks refuge in two Japanese traditional arts--ikebana and shakuhachi (bamboo flute)" INSCRIBED on the title page. Illustrated. 319 pp. ISBN: 978-0997253900.

Condition: Near fine in illustrated wrappers (name on first page).