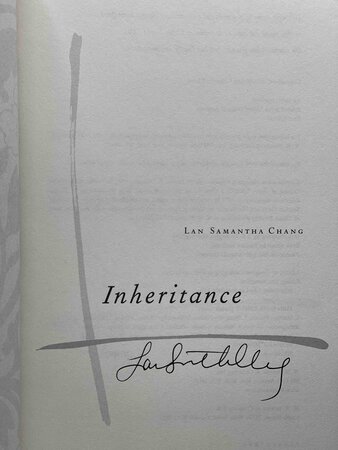 New York: W. W. Norton & Company, (2004) dj. SIGNED hardcover first edition - Author's first novel, and second book - "A complicated sister bond echoes through generations. . In China in the early 1930s, sisters Junan and Yinan are inseparable, even as Junan matures into beauty and Yinan remains awkward and plain. Junan enters into an arranged marriage and falls in love with Li Ang, her soldier husband. Separated from him when the Japanese invade China, Junan sends the unmarried Yinan to keep her husband's household. What is intended as an arrangement of convenience turns to betrayal when Li Ang and Yinan have an affair. As China is divided by communism, the family is also rent in two. Junan and her daughters Hong (who is also the narrator) and Hwa end up in the States, while Yinan and Li Ang remain in mainland China with their son and are effectively banished from memory." (Publishers Weekly) SIGNED on the title page. 302 pp. ISBN: 0-393059197.