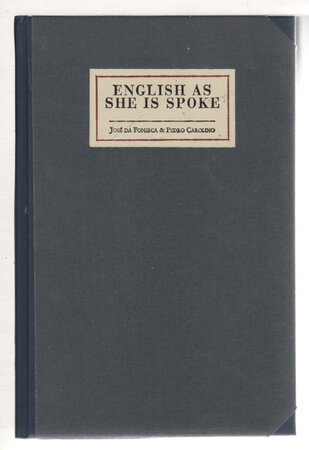 ENGLISH AS SHE IS SPOKE: The New Guide of the Conversation in Portuguese and English, in Two Parts (English and Portuguese Edition)

San Francisco: McSweeney's Books, (2002). Hardcover - Humorous excerpts from Fonseca and Carolino's notorious and abysmal phrasebook of 1855, perhaps the worst ever written, maybe because neither knew any English and they did not even have a Portuguese-English dictionary but instead relied on a Portuguese to French dictionary and a French to English one. In an introduction to one edition, Mark Twain wrote "Nobody can add to the absurdity of this book, no one can imitate it successfully." This edition is edited and with an introduction by Paul Collins. 133 pp. ISBN: 0-97190474X.

Condition: Fine in gray cloth with a small paper label on front cover, larger label on back cover, no dust jacket as issued,