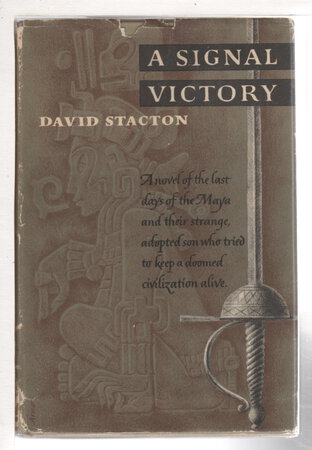 New York: Pantheon, (1960) dj. Hardcover first edition - Uncommon first edition of the first novel in his American Tryptich, a story of the last days of the Maya and one which gives a "vivid picture of the impact of two great civilisations upon each other. Guerrero was a Spanish soldier, shipwrecked on the shores of Yucatan. Years later the Spaniards came as conquerors - but by this time Guerrero was a prince, had married a king's daughter, and would be a spearhead of resistance to the white-skinned invaders from the west. [This] is Guerrero's story - that of a man who found where his true loyalties lay, and pursued them to their inevitable end." The Telegraph called it "A strange, outlandish, fearsomely intelligent novel." 224 pp.

Condition: Good in beige cloth in a good dust jacket (a tight copy with clean covers but some crlnkling to the upper edge of the textblock in a dj with some rubbing, chips and wear to the ends of the spine)