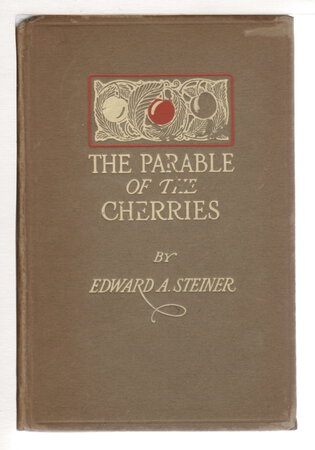 THE PARABLE OF THE CHERRIES.

New York: Fleming H. Revell Company, (1913). SIGNED hardcover first edition - A call for religious and ethnic tolerance told in five brief chapters, each presenting a different viewpoint - that of a doctor, rabbi, priest, pastor and the market - by this writer who was known for his advocacy for immigrants and immigration reform. Born into a well-to-do Jewish-Slovenian family in Szemioa, Hungary, and educated in Vienna and Heidelberg, he fled to the United States to avoid arrest for his sympathy with Slovaks. After converting to Chrisianity he became a professor of Applied Christianity at Grinnell College. SIGNED by Steiner on the front endpaper with the comment "It is not easy to keep high banners up against the storm, Devotedly yours.." Illustrated with a frontispiece with a tissue guard and one tinted internal plate. 64 pp.

Condition: Good overall in light brown covers with white lettering, small illustration on front cover - some rubbing to the lettering, side of spine covering splitting towards the rear cover,