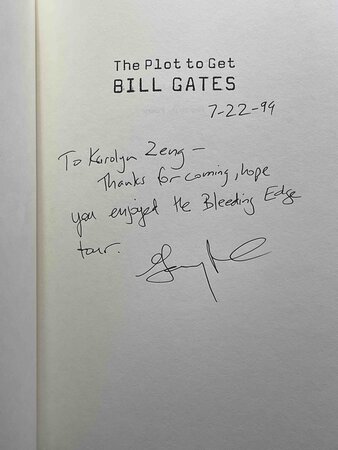 THE PLOT TO GET BILL GATES: An Irreverent Investigation of the World's Richest Man.and the People Who Hate Him.

New York: Times Business / Random House, (1999) dj. SIGNED hardcover first edition - INSCRIBED by the author on the half title page and dated in the year of publication. "From Gates's awkward adolescence to his position as the world's richest man, Rivlin takes a deep look into his character and uses him as a means to reveal the character of those that oppose him, a drama that he likens to that in Moby Dick. . . Rivlin tries not to take sides. Nevertheless, the Captain Ahabs (Ray Noorda, Scott McNealy, Larry Ellison, among others) come off looking less flawed, but certainly not as smart or as calculating or as dangerous as the white whale (Gates)." (Harry C. Edwards) includes a compendium of Microsoft jokes, index. 360 pp. ISBN: 0-812930061.