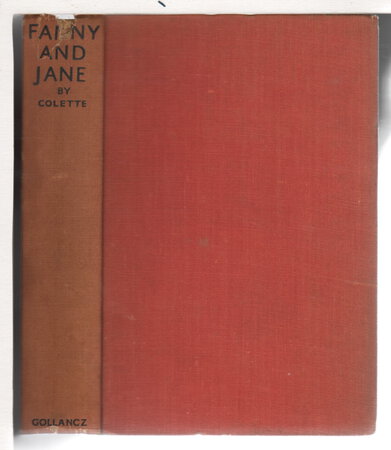 London: Gollancz, (1933). Hardcover - Translation of 'La Seconde', originally published in Paris in 1929. The New York Times review when this was first published in English called this a "subtle and penetrating study of a woman forced to watch her husband's endless and rather vulgar infidelities." However, when Farou has an affair with Jane, who is not only his secretary but Fanny's affectionate companion for four years, it is far more difficult to deal with. When the affair is discovered, Jane prepares to leave, but at Fanny's gentle urging, she consents to stay. Translated from the French by Viola Gerard Garvin. 283 pp.

Condition: Good only in salmon colored cloth - significant aging to the pages, sunning to the spine, and fraying at the top, affecting a few letters in the title, but overall sturdy and tight.