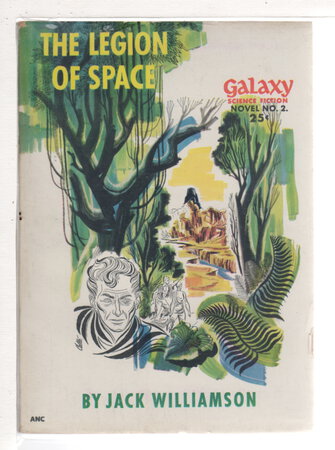 THE LEGION OF SPACE: An Exciting Novel of the Distant Future: Galaxy Science Fiction Novel No. 2.

New York: World Editions, Inc, (1950). First edition - The first paperback edition of this novel (complete and unabridged) originally serialized in Astounding Stories in 1934, then published in book form (with some revisions) by Fantasy Press in 1947 in an edition of 2,970 copies. Set in an era in which humans have colonized the Solar System but dare not go farther - The Legion is the military and police force of the Solar System. Cover art by Calle. 158 pp.

Condition: Near fine in illustrated wrappers (some toning to pages, cover bright and attractive).