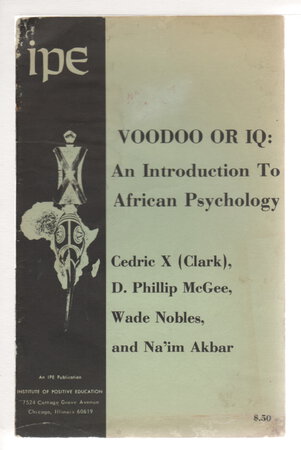 VOODOO OR IQ: AN INTRODUCTION TO AFRICAN PSYCHOLOGY

Chicago: Institute of Positive Education, 1976. First edition - First separate appearance of this ground-breaking article originally published in The Journal of Black Psychology, February, 1975. The authors are the founding members of the Society for the Study of African Sciences. "African Psychology is the recognition and practice of a body of knowledge which is fundamentally different in origin, content, and direction than that recognized and practiced by Euro-American psychologists. The differences between African Psychology and Euro-American Psychology reflect the differences between Black people and white people or, in terms of basic culture, between Africans and Europeans." Among the areas discussed are "Which is the Original Race, The Caucasian or The African?"; melanin and the central nervous system; the nature of Black intelligence and more. 20 pp.

Condition: Very good minus in stapled wrappers (some rusting from the staples.) Uncommon - no copies available in the trade at this time, only 8 holdings shown in Worldcat.