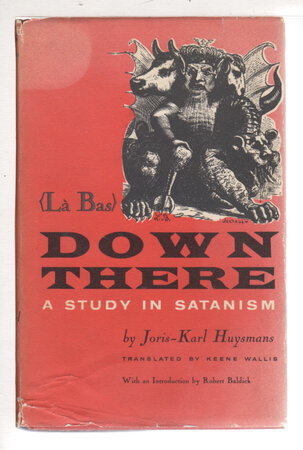 DOWN THERE (LA BAS): A Study in Satanism.

Hyde Park, New York: University Books, Inc., (1958) dj. Hardcover first edition - A classic novel of Satanism, originally published in France in 1891 and noted for its detailed and vivid description of the Black Mass, one which Huysmans himself attended. Although the novel centers on Durtal, a writer obsessed with the life of Gilles de Rais, a fifteenth-century child murderer, sadist, necrophile, and practitioner of all the black arts, Huysmans had firsthand knowledge of the satanic practices, witch cults, and the whole of the occult underworld which was thriving in late nineteenth-century Paris and in the city of Lyons. This edition includes a substantive introduction by Robert Baldick. Translated by Keene Wallis. with corrections by Lucy Miller. xxvii, 317 pp.

Condition: Near fine in red cloth in a good only dust jacket with sunning to the spine, several short edge tears, original price of $5.00 still present on dj flap..