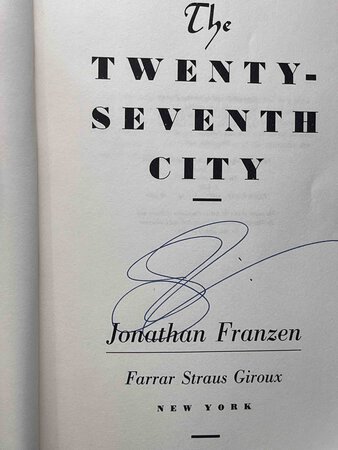 New York: Farrar, Straus & Giroux, 1988. SIGNED first edition - An amazing first novel, set in St. Louis (the "27th city " in size now) where a young woman from Bombay has just been chosen as the police chief - a story of suspense, conspiracy and love. Franzen was selected as one of the 20 best young American novelists by Granta magazine, and his novel, The Corrections, won the National Book Award and catapulted him to the position of being one of the 'hottest' of young American writers. SIGNED on the title page. According to the information on the back cover, the first printing of this first novel was an unusually large 40,000 copies, and even this advance issue was produced in many copies, although obviously it is much less common than the hardcover issue. 517 pages.