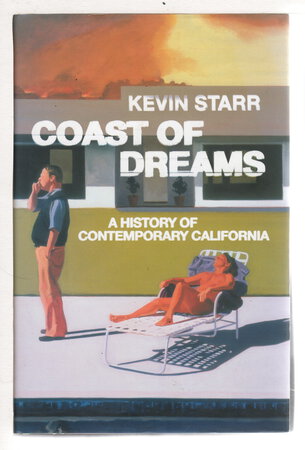 COAST OF DREAMS: A History of Contemporary California.

London: Allen Lane, (2005) dj. Hardcover first edition - A long and compelling book which probes the possible collapse of the California dream in the years 1990 - 2003, years when the state was sometimes stumbling, sometimes humbled, but, more often, flourishing with its usual panache. "From gang violence in Los Angeles to the spectacular rise and equally spectacular fall of Silicon Valley, from the Northridge earthquake to the recall of Governor Gray Davis, Starr ranges over myriad facts, anecdotes, news stories, personal impressions, and analyses to explore a time of unprecedented upheaval in California [and] an exceptional diversity of people, cultures, and values; an economy that mirrors the economic state of the nation; a battlefield where industry and the necessities of infrastructure collide with the inherent demands of a unique and stunning natural environment." Extensive notes and sources, index. xiii, 765 pp. ISBN: 0-713998466.