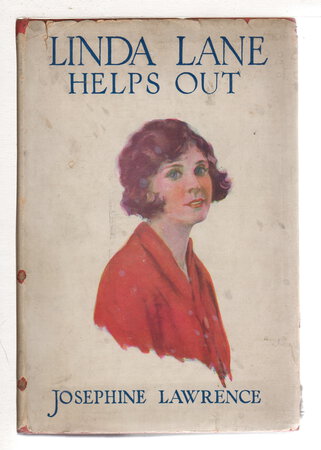 LINDA LANE HELPS OUT, #2 in series.

New York: Barse & Co., (1925) dj. Hardcover - The second book in this rather uncommon series "For Girls from 12 to 15" - one which puts a different spin on the popular orphan fiction series by having as its central character an optimistic and assertive young girl. The publisher described the series: "Then little Miss Gilly came to the rooms of the Society, the only home Linda knew, and took the girl home with her. A new life begins for Linda, and she finds, to her surprise and delight, how to get along with people, how to make friends, and slowly and surely how to be happy. Linda admires independence above all other traits of character. She has plenty of that quality herself and she is the kind of girl who not only cheerfully fights her own battles, but those of the weaker who cannot defend themselves. She is "bossy," lovable, impatient, and loyal, a born manager, whose plans invariably work out to satisfactory conclusions, and Linda has a definite plan which gradually unfolds in these books written about her -- the sort of plan only a girl without a home and parents of her own could think of and carry to completion. Illustrated by a glossy frontispiece and three plain internal plates by Charles L Wrenn. Lists to #5 in the ad in the rear. 258 pp. plus 4 pp pubisher's ads.

Condition: Very good in red cloth with black lettering and illustration on the front cover and spine in a good dust jacket (two small holes affecting both the dustjacket and the side of the spine, but otherwise the cloth covers are bright and clean, usual toning to pages, overall edgewear and minor chipping to dj)