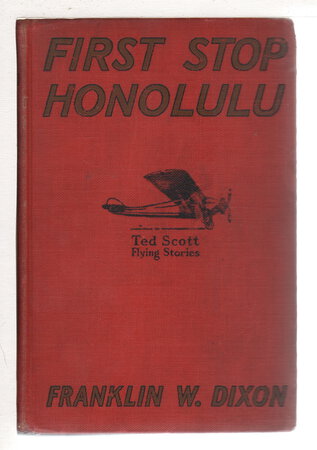 New York: Grosset & Dunlap, (1927). Hardcover - Lists to this title at the front of the book and to just 3 in the Hardy Boys series, The ad at the rear lists to a 1927 Garry Grayson title. The Ted Scott series was the longest-lived of the juvenile aviation series, selling over a million copies (in fact, during its heyday it outsold the Hardy Boys series.) Illustrated with a glossy frontispiece by Walter S. Rogers. Plain endpapers. 216 pp. plus 2 pp of publisher's ads.

Condition: Good overall in red boards with green lettering, no dust jacket (boards slightly warped with slight spine slant, missing front endpaper and some scribbling on the verso of the frontispiece)