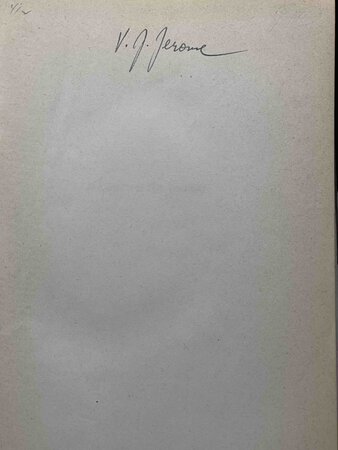 A LANTERN FOR JEREMY.

New York: Masses & Mainstream, (1952) dj. SIGNED hardcover first edition - An autobiographical novel written for older children by this American Communist author, set in 1905, when the revolutionary struggle in Tsarist Russia and Tsarist Poland rumbles into the hemmed-in streets of the boy's village in Poland. Howard Fast calls it a book of "outstanding beauty and warmth" as well as one in which "a child becomes aware of the class struggle of oppression, exploitation and injustice." SIGNED by the author on the front endpaper. A Rideout title. 288 pp.

Condition: Very good overall in green cloth (some damage to lower corner) in a fair only dustjacket with the front flap separated, the rear flap almost so, and other edgewear to the dj.