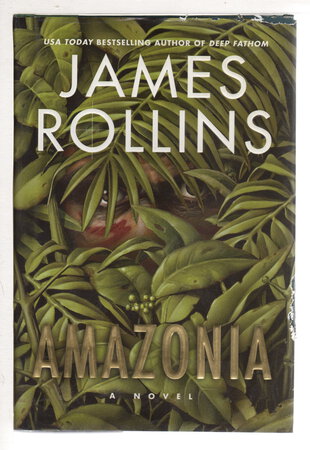 New York: William H. Morrow, (2002) dj. Hardcover first edition - A thriller set in the jungles of Amazon - Four years after an expedition to the interior of the jungle had been declared lost, a man "stumbles into a small missionary village, and within hours of the CIA operative and former special forces soldier - tongueless, scarred, his eyes wide with terror - is dead. But the most disturbing aspect of Agent Gerald Clark's death has his superiors in Washington baffled. When Agent Clark first came to the Amazon, he had only one arm - the result of a well-paced sniper's bullet. But the photograph of him submitted by a Brazilian morgue shows a corpse with two upper limbs fully intact." An expedition is quickly formed with the US government, Army rangers, a drug company and Nathan Rand, ethnobotanist and the son of the leader of the lost expedition. However, the stakes quickly mount - Clark brought a rapidly spreading and fatal disease with him and now a cure is urgently needed - and the expedition not only has to confront the dangers of the jungle - they are being tracked by a ruthless band of mercenaries. 420 pp. ISBN: 0-060002484.

Condition: Very good in very good dust jacket (some biopredation damage to the fold of the front flap of the dj, and upper edge0