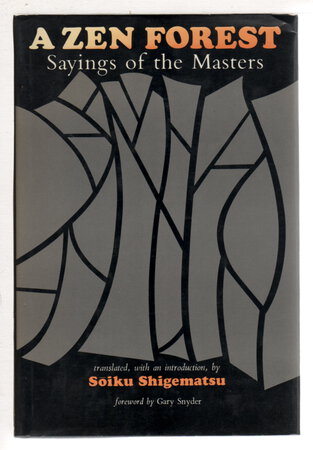 A ZEN FOREST: Sayings of the Masters Compiled and Translated with an Introduction By Soiku Shigematsu.

New York & Tokyo: Weatherhill, (1981) dj. Hardcover first edition - The distillation of Zen Buddhism is contained in its sayings - this book presents for the first time over 1200 of these short sayings in a poetic English translation by Soiku Shigematsu, calligraphy by his father, Kiju Shigematsu, abbot of the Shogun-ji Zen temple in Shizuoka. Illustrated. Includes an introduction by the translator, a foreword by Gary Snyder, an appendix with the original Chinese characters and their Japanese romanizations, map, glossary and a bibliographical note. xiv, 178 pp. ISBN: 0-834801590.

Condition: Fine in black cloth with silver lettering in a very near fine dust jacket (bit of sunning to letters on spine of dj)