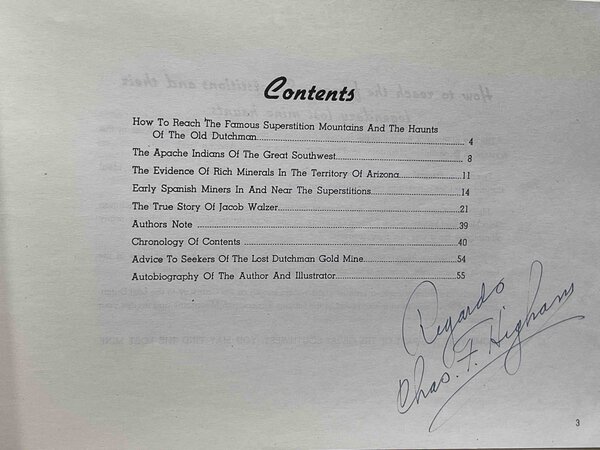 TRUE STORY OF JACOB WALZER: A Fascinating and Romantic Tale of an Old German Prospector Known to Fame as the Old Dutchman and Whose Famous Gold Mine is Still a Mystery of the Superstition Mountains.

El Paso, TX; McMath Company, n.d, (ca 1946). SIGNED first edition - An account of the lost Dutchman's gold mine hidden in the Superstition Mountains, a mine never found and still sought after. "Drama, adventure, mystery and murder - Gold is where you find it - go look for it." Illustrated by the author with maps and black and white images of five of his paintings of the Superstition Mountains. Includes several pages of a chronology which ranges from the first mention of the Apache Indians by a Spanish explorer in 1598 to several attempts to find the mine in 1945, including one trek by 2000 visitors. SIGNED on the table of contents page. Oblong format. 55 pp.

Condition: Near fine in gold illustrated wrappers lettered in red and black, with a beige cloth backstrip (small peeled spot on front cover)