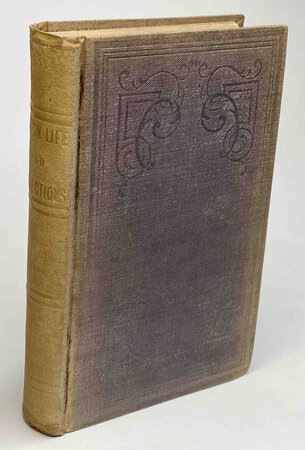 < >
Thompson, George (one of the prisoners).

PRISON LIFE AND REFLECTIONS or a Narrative of the Arrest, Trial, Conviction, Imprisonment, Treatment, Observations, Reflections, and Deliverance of Work, Burr, and Thompson Who Suffered an Unjust and Cruel Imprisonment in Missouri Penitentiary: Three Parts in One Volume.

New York: S. W. Benedict, 1848. Hardcover - An unusual very early copy of this contemporary picture of the abolitionist movement in the years before the Civil War. Alanson Work (1790-1879) had a wife and four children, who were all living at the Mission Institute (just across the river from the slave state of Missouri) and Thompson and James E. Burr (1814-1859) were young men studying for the ministry. In July of 1841, these three men crossed the Mississippi River into Marion County, Missouri from Quincy, Illinois, with the intent of helping slaves escape to Canada. They were sentenced to twelve years at the Missouri State Penitentiary for "slave abduction" but were later pardoned in 1845 to 1846 (Work first, then Burr and Thompson last). Although the petition supporting the request for a pardon for these three prisioners commented that they had been sentenced for "no crime unless it be a crime to obey the explicit commands of Jesus Christ. . . Slavery is in itself an open and palpable violation of every principle of natural justice and divine equity and that therefore no laws enacted by man to uphold it can be of any binding moral obligation whatever... " Thompson's own request for a pardon was more circumspect ""Although we cannot feel that Slavery is right, yet we do feel that much of our effort to do it away has been a 'zeal not according to knowledge'; and can now exercise a charity for slaveholders, which we did not before possess." The preface notes that the first edition met with "so speedy a sale that another edition is being sent forth into the world." xii, 14-370 pp.

Condition: Very good overall in publisher's original blind stamped cloth with gilt lettering on the spine - significant sunning to the spine and some to the edges of the boards, foxing throughout mostly affecting the margins, previous owner's name dated 1848. A tight and straight copy, uncommon both in this 1848 edition (it was reprinted numerous times by Work in the 1850s) and in this condition.