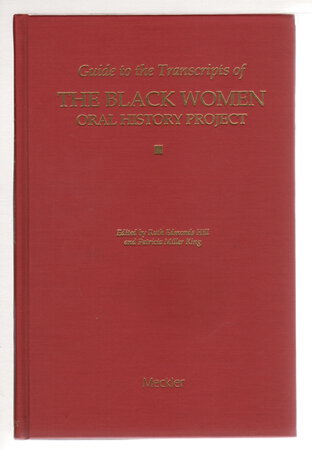 GUIDE TO THE TRANSCRIPTS OF THE BLACK WOMEN ORAL HISTORY PROJECT

Westport CT / London: Meckler Publishing, 1981. Hardcover first edition - Part of a series collecting interviews in a black women oral history project, sponsored by Radcliffe College's Arthur and Elizabeth Schlesinger Library on the History of Women in America. Between 1976 to 1981. 72 Black women from all over the United States were interviewed - they had had careers in education, law, the arts, business, medicine and more - and represented a cross section of women of African descent who had made significant contributions to American society in the early and mid-20th century. The women range from Jessie Harriet (Scott) Abbott, who was involved in the Tuskegee community since 1923 to Harlem Renaissance writer Dorothy West and Arline (Stewart) Yarbrough, a civil service worker, business owner and activist in the Seattle area. List of participants. Index. xv, 152 pp. ISBN: 0-887366813.