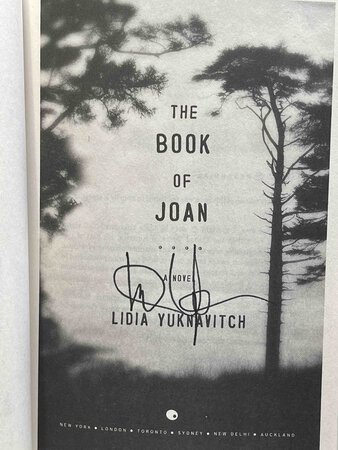 THE BOOK OF JOAN.

New York: Harper Perennial, (2018). SIGNED - A new Joan of Arc for a world almost destroyed by global warming and unending world wars. "Fleeing the unending violence and the planets now-radioactive surface, humans have regrouped to a mysterious platform known as CIEL, hovering over their erstwhile home.. . Out of the ranks of the endless wars rises Jean de Men, a charismatic and bloodthirsty cult leader who turns CIEL into a quasi-corporate police state. A group of rebels unites to dismantle his iron rule - galvanized by the heroic song of Joan, a child-warrior who possesses a mysterious force that lives within her." A NY Times Notable book. SIGNED on the title page. 267 pp. ISBN: 978-0062383280.