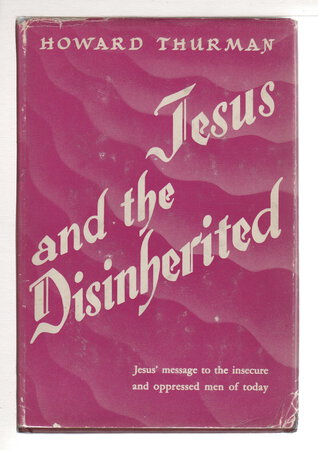 JESUS AND THE DISINHERITED.

Nashville: Abingdon-Cokesbury Press, (1949) dj. Hardcover first edition - An attempt to answer the question of why Christianity seems impotent to deal radically and effectively with issues of discrimination and injustice based on race, religion and national origin - an issue which Thurman, a minister and civil rights activist, wrote frequently about. In his preface, he noted that the full development of his ideas were in a series of lectures - the Mary L. Smith Memorial Lectures which he gave at Samuel Huston College, Austin, Texas in April 1948, and upon which this book is based. In it, he interprets the teachings of Jesus through the experiences of the oppressed and discusses nonviolent responses to this oppression. According to Martin Luther King's biographer, King studied this book during the Montgomery bus boycott. Scarce in the first edition, especially in dust jacket and in this condition. 112 pp.

Condition: Near fine in burgundy boards with gilt lettering on the spine (lower corners slightly bumped) in a very good dust jacket with some minor edgewear, original price of $1.25 still present on dj flap.