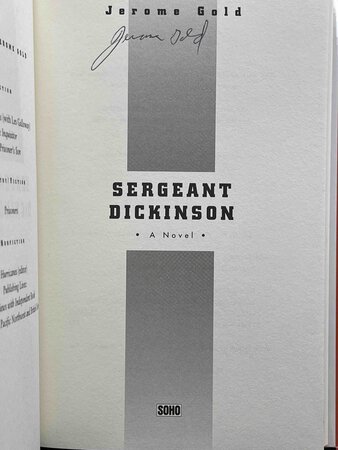 New York: SOHO Press, (1999) dj. SIGNED hardcover first edition - A brief, but highly praised, novel about the Vietman war by an author who was a Special Forces Sergeant in Vietnam at Plei Me in Vietnam's Central Highlands and later at Pleiku (where this novel is set) in 1964 and 1965. "Sergeant Dickinson is the radioman of a Special Forces A-Team in the Central Highlands of Vietnam. The camp is encircled and attacked for nine days by the North Vietnamese Army, anxious to lure larger American units into combat for the first time. Dickinson survives, just. The remnants of the team are broken up, the soldiers scattered among other commands. A unit that battered, goes the thinking, can't be put back together." This book was originally published in 1985 in somewhat different form under the title, "The Negligence of Death". SIGNED on the title page. 184 pp. ISBN: 1-569471622.