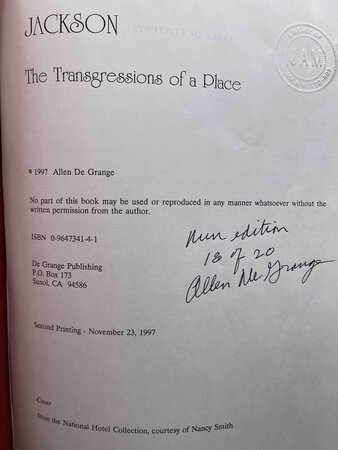 JACKSON: The Transgressions of a Place.

Sunol, CA: De Grange Publishing, 1997. SIGNED - A history of Jackson, California, a gold rush town in Amador County and the site of two hard-rock mines - the Kennedy and the Argonaut, which had the most deadly mining disaster in California. A combination of folksy interviews, recollections from older residents, much of this book focuses on the six-year battle in the early 1950s to shut down open prostitution and gambling in the city - allegedly the last city in California, where prostitution was not only tolerated but protected. Included are numerous newspaper accounts, official records and more. Although most of the police and officials tried for corruption and bribery were acquitted, the state, under Attorney General (later governor) Brown continued the crackdown. Illustrated with photographs throughout. SIGNED on the title page with the notation "num edition 18 of 20". The second printing includes a postscript and a holographic page of comments on the reception the book had originally. Bibliography, glossary. Large format. 226 pp. ISBN: 0-964734141.