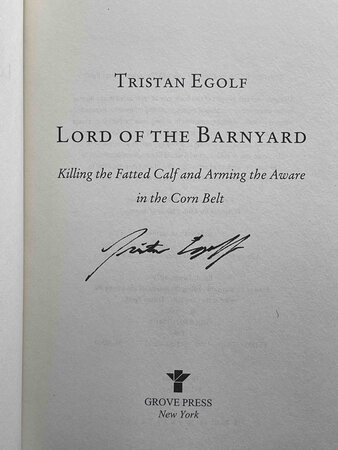 LORD OF THE BARNYARD: Killing the Fatted Calf and Arming the Aware in the Cornbelt.

New York: Grove Press, (1999) dj. SIGNED hardcover first edition - The author's very highly praised first novel - that is, after it was rejected by some 70 US publishers and was first published in France in translation. Described as "a manic, inventive, and painfully funny debut novel is the story of a town's dirty laundry - and a garbagemen's strike that lets it all hang out. It begins with the death of a woolly mammoth in the last Ice Age and concludes with a greased-pig chase at a funeral in the modern-day Midwest. In the interim there are two hydroelectric dam disasters, fourteen tavern brawls, one shoot-out in the hills, three cases of probable arson, a riot in the town hall, and a lone tornado, as well as appearances by a coven of Methodist crones, an encampment of Appalachian crop thieves, six renegade coal-truck operators, an outraged mob of factory rats, a dysfunctional poultry plant, and one autodidact goat-roping farm boy John Kaltenbrunner . . a brilliantly comic tapestry of a Middle America still populated by river rats and assembly line poultry killers, measuring into shot glasses the fruits of years of quiet desperation on the factory floor." (from the dj) SIGNED on the title page. 410 pp. ISBN: 0-802116418.