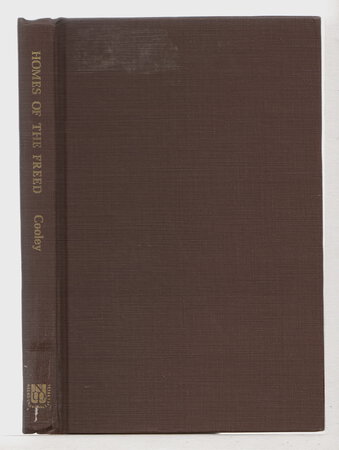 HOMES OF THE FREED.

Edition: Facsimile reprint of a work originally published in 1926.

New York: Negro Universities Press (Greenwood Press), (1970). Hardcover - An account of the school originally founded for freed slaves on Saint Helena Island in South Carolina, but which, under the leadership of Rossa B. Cooley, the daughter of a Vassar professor, and Grace Bigelow House (1877-1961), the daughter of a missionary teacher in Turkey, became very influential. They emphasized vocational training, especially in agriculture, and the preparation of African Americans to lead more satisfying and productive lives within their own community. They considered the whole of Saint Helena Island as one school-farm-community so in addition to running the school, they established a credit co-operative for local farmers; worked with South Carolina State College in teacher-training programs; and carried out plans for improving practically every aspect of the lives of the African American population. Numerous visitors to Saint Helena helped spread the reputation of Penn School and its gospel not only among Americans interested in African American education, but also to many foreign missionaries and colonial officials, especially in British territories in southern Africa and India. Introduction by J. H. Dillard. Illustrated with 4 woodcuts by J. J. Lankes. 199 pp.

Condition: Ex-library but with relatively few markings, and clean content, in brown cloth with gilt lettering on the spine - no dustjacket as issued.