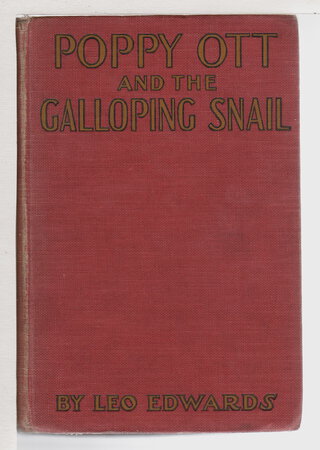 POPPY OTT AND THE GALLOPING SNAIL #3.

New York: Grosset & Dunlap, (1927). Hardcover - The 11 book Poppy Ott series was an offshoot of the author's very popular Jerry Todd series, featuring one of Jerry's buddies. However, in contrast to Jerry's middle class upbringing, Poppy is first introduced as a boy tramp, compelled to wander around the country by his shiftless father, but he soon shows his worth - and thus earned his own series. In creating the character of Poppy Ott, Edwards was drawing on both his poverty-ridden youth and innate business acumen to express his philosophy of getting ahead in life. Poppy is depicted as a very likable but real go-getter, dreaming up money-making projects and organizing them. Illustrated by Bert Salg with a glossy frontispiece and three internal plates, 238 pp. plus 10 pp of publisher's ads. Lists to #4 in this series in the back.

Condition: Good only in light red cloth with yellow and black lettering (some fraying at the ends of the spine, previous owner's name, corners bumped but still a tight and sturdy copy)