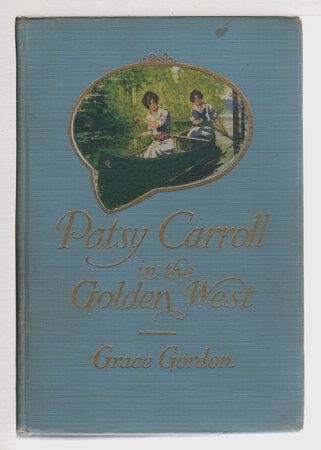 PATSY CARROLL IN THE GOLDEN WEST, #3 in the series.

New York: Cupples & Leon Company, (1920). Hardcover - The third book in this four book series described by the publisher as "permeated with the vibrant atmosphere of the great outdoors. The vacations spent by Patsy Carroll and her chum, the girl Wayfarers, in the north, east, south, and west of the wonderland of our country, comprise a succession of tales unsurpassed in plot and action." In this, the girls travel by ship to New Orleans and then by train to California, where they reside in the dream city of the Movie World and become involved with a famous silent film drama. The geography - and the Native Americans who play a role in this - seem to be a bit scrambled but the story is interesting. Illustrated with by Thelma Gooch with a frontispiece and three glossy internal plates. 308 pp plus 4 pp publisher's ads. Ad lists all 4 titles in this series.

Condition: Very good in light blue cloth with a small pasted on illustration, gilt lettering (minor wear to the covers, but overall sturdy and attractive)