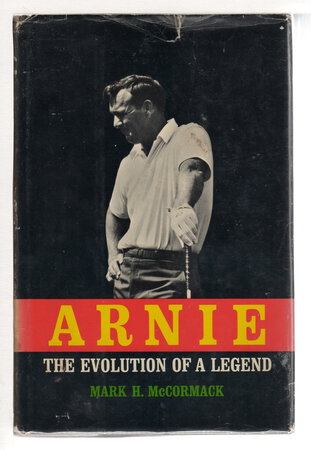 ARNIE: The Evolution of a Legend

New York: Simon & Schuster, (1967) dj. SIGNED hardcover first edition - An in-depth look at the career of golf great, Arnold Palmer, including his come-back win at the US Open in 1960, written by his agent, friend and fellow member of the Golf Hall of Fame, Mark McCormack, and written at the height of Palmer's popularity as one of the superstars of television's golf age. Palmer has also been credited with popularizing and make more accessible a sport previously seen as an elite upper class pastime. SIGNED by Arnold Palmer on the front endpaper. Includes 32 pp of photographs, an appendix with statistics on Palmer's career (he won 68 PGA Tour titles from 1955 to 1973) and an index. 318 pp.

Condition: Near fine in olive green boards with a cream spine (a few spots on the front cover) in a good dust jacket with a short closed tear and associated creasing to the upper edge, chipping and some loss at the ends of the spine, mostly price-clipped ($ sign still visible)