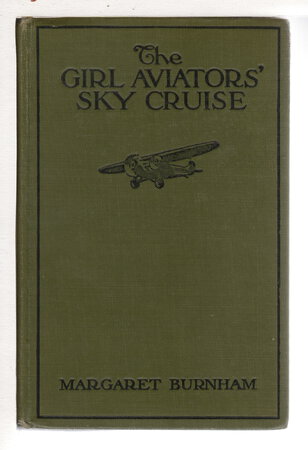 Chicago: M.A. Donohue & Company, n.d. ( c 1912). Hardcover - The third book in this series featuring the adventures of "girl aviators" Peggy, Jess and Bess, and their brothers Roy and Jimsy - "To most girls a coaching or yachting trip is an adventure. How much more perilous an adventure a "sky cruise" might be is suggested by the title and proved by the story itself. (publisher's ad) 291 pp plus 2 pp publisher's ad. It has been suggested that this series came to end (with only 4 titles) in late 1912 due to several real life fatal airplane crashes of "girl aviators" but that would seem to be contradicted by the fact that Donohue issued later reprints. Still a fascinating look at a time when young women were taking to the air, even though they had still achieved the right to vote.