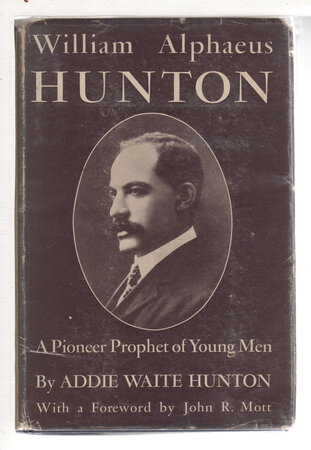 New York: Association Press, 1938. dj. Hardcover first edition - Scarce second book by this writer who is best known for her World War I account 'Two Colored Women with the American Expeditionary Forces.' A biography of her husband, who died in 1916, but who had attained the highest position in the YMCA held by an African American at that time. Hunton herself remained active in the YWCA and in the fight for racial equality. Published to coincide with the 50th anniversary of the Colored Work Department of the National Council of the YMCA, and also the 50th anniversary of Hunton establishing a branch for colored men and boys in Norfolk, Virginia in 1888. Includes a foreword by John R. Mott. 176 pages.

Condition: Very good+ in blue cloth (toning to the paper, as usual for this title) in a good only but very uncommon dustjacket, with some overall edgewear and rubbing, closed tear and approx 1 inch chip on the upper edge of the back cover.)